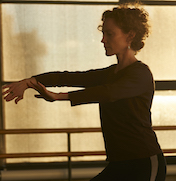 Emily Coates is dancer, choreographer, and writer whose projects move across cultural and disciplinary divides. Over the course of her thirty year career in dance, she has performed internationally with New York City Ballet, Mikhail Baryshnikov’s White Oak Dance Project, Twyla Tharp, and Yvonne Rainer. Career highlights include three duets with Baryshnikov, and lead roles in works by George Balanchine, Jerome Robbins, Lucinda Childs, Trisha Brown, Mark Morris, Karole Armitage, Erick Hawkins, Tharp, and Rainer, among others. Her solo and collaborative work has been commissioned and presented by Danspace Project, Ballet Memphis, Performa, Carnegie Hall, Wadsworth Atheneum, University of Chicago, Yale University Art Gallery, and Works & Process at the Guggenheim. Her choreography for theater includes Stravinsky’s The Soldier’s Tale (2014, 2018) directed by Liz Diamond, and The Square Root of Three Sisters (2016), directed by Dmitry Krymov. In 2017, she premiered her first evening-length piece, Incarnations, at Danspace Project. Her newest work, A History of Light—a multimedia performance that narrates a history of the universe through the contributions of pioneering women artists and scientists—was created in collaboration with visual artist Josiah McElheny and premiered at Danspace Project in November 2018. Her recent fellowships and awards include a 2015 grant from the Alfred P. Sloan Foundation in the category Public Understanding of Science, Technology, and Economics (with particle physicist Sarah Demers) and a fall 2016 Fellowship at the Center for Ballet and the Arts. Her book Physics and Dance, co-written with Demers, is forthcoming from Yale University Press in January 2019.

Grant Title: “Moving and Being Moved at the Intersection of Science and Dance”

Abstract: My project traces a series of embodied, kinesthetic ways of knowing across science and dance cultures. Focusing on sites in which dance artists and scientists collide, my goal is to craft epistemologies of movement that help us to better understand how our knowledge of the animate world is produced and circulated.