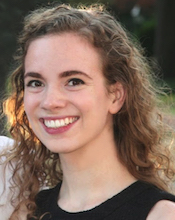 Mariel Pettee is a 4th-year PhD candidate in Physics at Yale University specializing in high-energy particle physics at the Large Hadron Collider at CERN. As a choreographer and performer, she also uses theatre and dance work to research audience activation, duration, authenticity, fear, and playfulness. Her investigations into the intersection of art and science have included helping teach classes at Yale including the Physics of Dance and Technologies of Movement Research, interning with Arts@CERN, and developing an multimedia performance installation inspired by particle physics for her senior thesis at Harvard University. AB, Harvard University; MA, University of Cambridge. AB, Harvard University; MA, University of Cambridge.

Abstract: “Machine Woman,” the result of a collaboration between Mariel and a team of female filmmakers, will be a short experiential documentary film following Mariel’s process of generating choreography using machine learning techniques on 3D motion capture data of her own movements. The film will touch on themes including the preservation and publication of one’s own unique movement identity and choreographic thoughts, the role of memory in neural networks vs. our lived experiences, and the problem of encoding biases in machine learning on a broader scale.