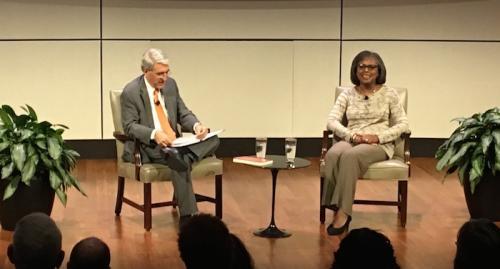 On Monday, October 30th Anita Hill LAW ’80 returned to Yale to join President Salovey for the third event in the President’s Women of Yale Lecture Series.  When Professor Hill came to campus nearly four decades ago, she remembers feeling like she was walking into an “alien space” that she did not know how to embrace. While there were a number of other women at the Law School, the combination of her gender, race, and remote upbringing in Oklahoma made the environment particularly difficult to navigate.  Even still she obtained her Juris Doctor degree with honors and was admitted to the District of Columbia Bar in 1980. After three years of working closely with Clarence Thomas, then the chairman of the U.S. Equal Employment Opportunity Commission, Hill left to launch a career in academia first serving as an assistant professor at Oral Roberts University until 1986 and then as faculty member at University of Oklahoma College of Law.

In 1991, Hill was called to testify against her former mentor and boss, Clarence Thomas, who had been nominated by President George H.W. Bush to succeed Associate Justice Thurgood Marshall on the Supreme Court. In the televised hearings, Hill testified that Thomas had sexually harassed her during the time he advised her at the Department of Education and the EEOC. Despite her testimony, the Senate confirmed Thomas to the Supreme Court, albeit by the narrowest margin since the 19th century. Even though her testimony did not stop Thomas from sitting on the Supreme Court, it opened the door for more women to come forward about instances of sexual harassment in addition to raising public consciousness regarding inappropriate, illegal behaviors against women in the workplace.

Anita Hill’s observations about sexual harassment and misconduct last Monday were particularly relevant given recent media attention to cases of high profile individuals like Harvey Weinstein, and institutions like Dartmouth College where three professors in the same department have been accused of misconduct. Public awareness of cases of misconduct has improved as the press adopted better and faster methods of reporting on these kinds cases, yet the “structures, people, and systems” that enable sexual harassment remain entrenched in attitudes and institutions according to Hill. Given her observations last Monday, the rightful course of action to take in addressing sexual misconduct would be to dismantle those enabling systems.

In the academy, Hill observed that the culture of secrecy surrounding sexual harassment claims often allowed those who had been suspected of misconduct to remain at the university. Not uncommonly, they were accused, secretly punished, and then moved to a different position but still remained in the organization. The recent events at Dartmouth college typify this kind of indirect punishment: the three faculty members received paid leave during the investigation of the allegations. Under many circumstances, paid leave (such as sabbatical) is a perk; in fact each year we’re reminded it’s a privilege, not a right. Here it sends an indirect signal that the University remains committed to its accused and convicted faculty. Furthermore, by keeping their departure quiet, the University temporarily evades a media circus but also leaves many questions unanswered.  The lack of transparency in this kind of situation sets the stage for the accused to return to their positions unscathed. Once the event has blown over, so to speak, the accused can carry on as if nothing has happened and continue to accumulate honors that make them more indispensable to their University. As the accused’s renown and, as an extension, power, the accusations gradually fade away and are excused by fame.

Academic communities should consider their responses to these “rockstar” academics who receive special treatment and are excused in spite of their inappropriate behavior. Ideally, all members of the community should be held to the same standard of conduct and receive the same punishment if that conduct is breached. For if the most respected, renown members of the community, our role models, in short, disregard the rules, then why should others respect them? and why would violations be reported?  At the very least, universities could make it harder for those who have been found to have committed misconduct in the past harder to hide it.

The Women Faculty Forum has a ten year history in responding to concerns about sexual harassment at Yale. In 2007, WFF began advocating for students in the medical school and in Yale College. In addition to providing mentoring to students on ways to combat harassment and misogyny, members of Steering and Council developed recommendations to help the university to respond effectively to unacceptable behavior. In the following year, the newly formed Sexual Misconduct Working Group composed of faculty, staff, and students from across the university examined, researched , and wrote a report on University misconduct policies. In 2009, the WFF submitted its  Report on Sexual Misconduct at Yale to President Richard Levin, Provost Peter Salovey, and General Counsel Dorothy Robinson. The report not only recommended a University-wide policy on sexual misconduct but also sought to create a centralized and transparent board to resolve all sexual-misconduct complaints as well as a rapid response plan to ensure expeditious and clear announcements of harassment.  The report was well received, and in response, the Provost’s office formed a committee to review sexual misconduct policies at Yale.

Beginning in 2010 under President Levin, the University formed an implementation committee to adopt many of the key policy changes proposed by the WFF. The new procedures took effect at Yale when the University-Wide Committee on Sexual Misconduct officially convened on July 1, 2011. Since 2011, the UWC has published semi-annual reports to make transparent their issuance and University Responses. In 2017, the UWC saw an increase in the number of complaints brought to the University’s attention.

The 2015 American Universities Sexual Climate survey gave the University a glimpse of harassment that goes unreported and how Yale’s climate compares to other universities. While the majority of the research focused on the sexual misconduct amongst the undergraduate population, the Graduate and Professional student experiences with sexual assault warranted attention. The cumulative estimate of graduate and professional students’ experiences of sexual assault (8.6%) was above the AAU aggregate estimate (7.4%), indicating that harassment culture at Yale was above the average of the other 27 schools who participated in the survey. On the graduate level, 29.5% of women and 18.2% of men who experienced sexual harassment indicated that faculty members were the source of the harassing behaviors. These numbers reveal that harassment from faculty remains a problem even since the University banned amorous relationships between faculty and students in 2010. Evidently, while the WFF was instrumental in the beginnings of Yale’s Sexual Misconduct policies and structures, sexual harassment remains a pressing issue at the University. The WFF seeks to support new research and initiatives to uncover and reduce sexual harassment in academia and in the wider world.

Learn more about the  President’s Women of Yale Lecture Series.